At the time, the first African conference was the largest regional conference ILO had ever organized. It took place in a special context: the accession to independence of many new African States. The attention centred on Africa in 1960 also gave the conference greater resonance internationally. It adopted three major resolutions on ILO′s work in Africa: 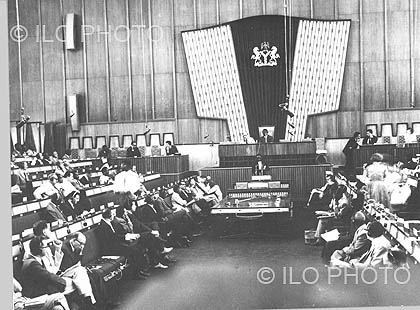 For the ILO Director-General, David A. Morse, the conference was of paramount importance in that it enabled the representatives of States from all parts of Africa to discuss social issues and matters relating to work, at the time among the States′ main concerns.
(Photo: First African Regional Conference, Lagos, Nigeria, 1960.)

In June 1963, the ILO Governing Body decided to exclude  South Africa  from some of the trade committees because of its policy of apartheid. In 1964, at its 48th Session, the International Labour Conference (ILC) unanimously approved the Declaration concerning the Policy of Apartheid of the Republic of South Africa and the ILO programme for the elimination of apartheid in the field of labour. The Declaration reasserted the principle of equal opportunity, condemned the South African Government′s racial policy and demanded that South Africa recognize and fulfil its undertaking to respect the freedom and dignity of all human beings by renouncing its policy of apartheid. 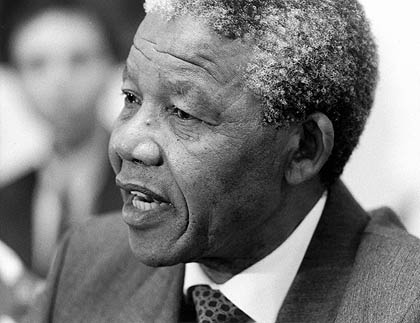 In order to avoid being officially excluded, the Republic of South Africa withdrew from ILO of its own accord, notifying its departure on 11 March 1964. It rejoined the Organization on 26 May 1994, three years after the official abrogation of the apartheid laws and ten days after the election of Nelson Mandela as President of the Republic. In 1990, Nelson Mandela, then Vice-President of the African National Congress (ANC), attended the 77th Session of the ILC, where he paid tribute to ILO for its struggle against apartheid. In June 2007, ILO awarded its first annual Decent Work Research Prize jointly to Nelson Mandela and Professor Carmelo Mesa-Lago, in recognition of their unique personal contribution to improving the lives of people around the world. The Instrument of Amendment to the ILO Constitution (No. 2, 1964), which reads “Inclusion in the Constitution of the International Labour Organisation of a provision empowering the Conference to suspend from participation in the International Labour Conference any member which has been found by the United Nations to be flagrantly and persistently pursuing by its legislation a declared policy of racial discrimination such as apartheid", is not currently in force.

(Photo: In June 1990, the 77th Session of the International Labour Conference played host to Nelson Mandela, at the time Deputy President of the African National Congress (ANC). On that occasion, Mandela paid tribute to ILO for fighting apartheid.) 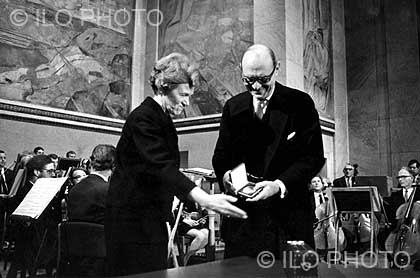 In his report to the International Labour Conference (54th Session, 1970), the Director-General, David A. Morse, recalled that 1969 had been an exceptional year for ILO. In almost all the Member States, special arrangements had been made to celebrate the Organization′s anniversary and to enhance knowledge of the principles on which it was founded, the results it had obtained and the work it had done. The United Nations, its specialized agencies and various intergovernmental organizations had joined in the 50th anniversary celebrations. 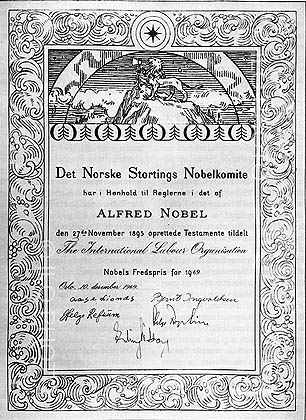 The year′s crowning event was the attribution to ILO of the Nobel Peace Prize. The Director-General, accompanied by the members of the Governing Board′s Bureau, received the Prize on behalf of the Organization on 10 December 1969. On that occasion, Mrs. Aase Lionaes, Chairman of the Nobel Committee, stated: “Beneath the foundation stone of the ILO′s main office in Geneva lies a document on which is written: Si vis pacem, cole justitiam – If you desire peace, cultivate justice. There are few organizations that have succeeded, to the extent that ILO has succeeded, in translating into action the moral idea on which it is based [...] During these fifty years the ILO has adopted over 250 Conventions and Recommendations. And even though not all of its 121 member countries have ratified anything approaching all the Conventions, I believe we are justified in saying that the ILO has permanently influenced the social welfare legislation of every single country” (see Nobel Peace Prize, 1969, pp. 6 and 10).

(Top photo: ILO Director-General David A. Morse receives the 1969 Nobel Peace Prize on behalf of the ILO from Aase Lionaes, Chairman of the Nobel Committee of the Norwegian Parliament, in the Aula of the University of Oslo, on 10 December 1969. / Bottom photo: Nobel Peace Prize diploma discerned on ILO, 1969.) 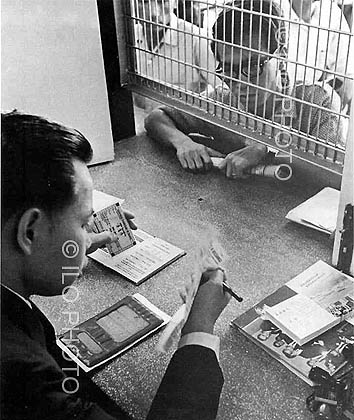 The World Employment Programme (WEP) was established for two reasons: to make the productive employment of a large proportion of the population one of the principal objectives of national and international development policies, and to help the Member States draw up and implement action plans to that end. Thus, as the Director-General, David A. Morse, recalled in his report to the International Labour Conference (53rd Session, 1969), the WEP required the full use of all ILO′s means of action. Technical cooperation and standard-setting efforts therefore had to be pursued and incorporate “a substantial research component, in order to throw light on the many technical questions of employment creation, and the training necessary to this end”. (p. 124) Over the years, the WEP has received broad financial support from various governments and international institutions (notably through the United Nations Development Programme - UNDP and the United Nations Population Fund - UNFPA).

(Photo: A seafarer looking for work at the employment service set up in Hong Kong with the help of ILO. Helping to reduce unemployment is one of the goals of the World Employment Programme. Undated.) 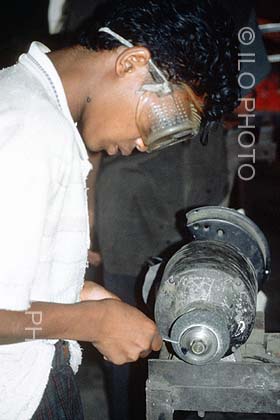 “This fundamental Convention sets the general minimum age for admission to employment or work at 15 years (13 for light work) and the minimum age for hazardous work at 18 (16 under certain strict conditions). It provides for the possibility of initially setting the general minimum age at 14 (12 for light work) where the economy and educational facilities are insufficiently developed.” (See Rules of the game: a brief introduction to international labour standards, p. 37).

ILO started dealing extensively with the problem of working conditions and the working environment in the early 1970s, when it adopted two resolutions relating thereto (Contribution of the International Labour Organisation to the Protection and Enhancement of the Environment Related to Work, 1972, and The Working Environment, 1974). 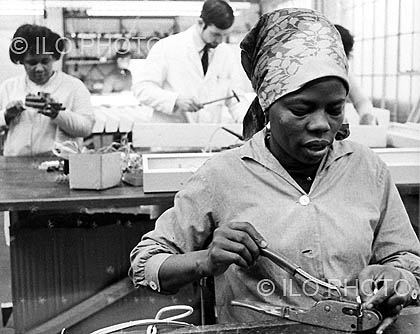 At its 60th Session, the International Labour Conference took another step, adopting a resolution on ILO′s future action in the field of working conditions and environment. The resolution stated that “the improvement of working conditions and the protection of the physical and mental health of workers constitute an essential and permanent mission of the International Labour Organisation”. After officially consulting the Member States and national employers′ and workers′ organizations, the ILO Governing Body approved the general outline of the PIACT at its session in November 1976. The Programme had five main objectives:

(Photo: Juliana Bankole, a skilled Nigerian worker, at work in a north London suburb. At the time, half the company's staff were women and one quarter were immigrants. Management in no way discriminated on the grounds of sex or race. Through its conventions, ILO seeks to make such working conditions the rule. Undated.)

Complaint against Poland for non-compliance with Conventions Nos. 87 and 98 (1982) 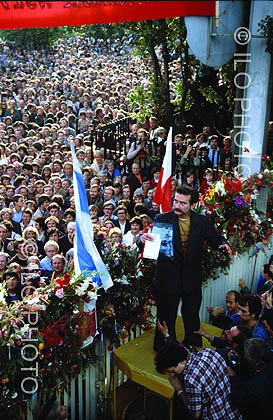 In 1957, Poland ratified the Freedom of Association and Protection of the Right to Organize Convention, 1948 (No. 87) and the Right to Organize and Collective Bargaining Convention, 1949 (No. 98). However, when martial law was declared in 1981, the Polish Government suspended the activities of the Solidarnosc trade union and dismissed many of its leaders and members. In a letter dated 16 June 1982 and sent to the ILO Director-General, Marc Blondel, workers’ delegate from France, and Liv Buck, workers’ delegate from Norway, filed a complaint under Article 26 of the ILO Constitution against the Government of Poland for non-compliance with the two conventions mentioned above. Mr. Blondel and Ms. Buck, as their countries’ workers’ delegates to the 68th Session of the International Labour Conference, were competent to file a complaint under article 26, paragraph 4, of the ILO Constitution. On 27 May 1983, the ILO Governing Body approved, by 44 votes in favour and 6 against, with 5 abstentions, the recommendation of the Committee on Freedom of Association to have the case as a whole considered by a commission of inquiry, in accordance with article 26, paragraph 3, of the ILO Constitution. The Commission of Inquiry, whose members were designated on 23 June 1983, held its first working session on 5 and 6 September 1983. Chaired by Nicolas Valticos, the Commission formulated its conclusions and recommendations on 2 May 1984; it found that there had been grave violations of both ILO conventions. ILO invoked those conclusions when it urged Poland to fulfill its obligations. The Polish Government subsequently recognized Solidarnosc and granted it legal status in 1989. For Lech Walesa, Solidarnosc leader and later President of Poland from 1990 to 1995, “the Commission of Inquiry created by the ILO after the imposition of martial law in my country made significant contributions to the changes which brought democracy to Poland” (see Rules of Game: A brief introduction to International Labour Standards, p. 109).

(Photo: Lech Walesa after the signing of an agreement, 1980. Poland)