Founding of the ILO

The idea of regulating labour at an international level gradually gained favour throughout the 19th century. The First World War marked a watershed in the movement: the Paris Peace Conference that opened on 29 January 1919 established the Commission on International Labour Legislation to draft the constitution of a permanent international organization. The text adopted on 11 and 28 April under the heading “Labour” became Part XIII of the Treaty of Versailles, or the « ILO Constitution ». The Peace Conference adopted the Treaty of Versailles in its entirety on 28 June 1919. Articles 387 to 427 deal with the organization of ILO, which comprises

ILO is characterized by the way it functions – on the basis of tripartism – and its universality and is unlike any other organization.  It has been guided since its inception by the generous principle of social justice, an indispensable condition, according to the Treaty of Versailles, for “universal and lasting peace”.
The number of Member States rose from 44 in 1919 to 182 in 2008. The list of "founder Members" comprised the 29 State signatories of the Treaty of Versailles which, by ratifying the Treaty, automatically became Members both of the League of Nations and of the ILO. The title, "Founder Member of the ILO", was moreover also granted to 13 other States invited to adhere to the Covenant of the League of Nations.

ILO also acts through the regional conferences, specialized committees and expert meetings it has set up over the course of its existence. Today, its various fields of action focus on four strategic objectives:

(Photo: ILO Assistant Director Harold Butler and Director Albert Thomas enjoy a moment of rest in front of the first ILO building, La Châtelaine. This building now houses the Headquarters of the International Committee of the Red Cross. Pregny, Switzerland, 1920.)

“General Conference of representatives of Member States”, the ILC is the ILO plenary body in charge of drawing up, adopting and supervising the international labour standards. It constitutes a world labour platform for discussion of social matters.
The First Session of the ILC, which brought together delegations from 40 countries, was held in Washington, in October-November 1919. Each delegation comprised two government delegates, one employers’ delegate and one workers’ delegate. The delegates could be accompanied by advisors, whose numbers varied depending on the country. The Conference’s first decision was to admit Germany and Austria as Member States. It went on to adopt six conventions and six recommendations on fundamental questions:

The International Labour Office sets up shop in Geneva (1920) 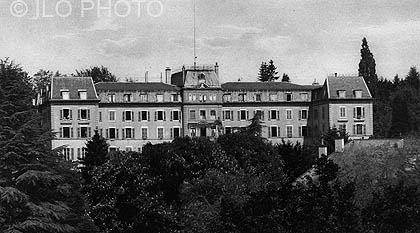 The International Labour Office (ILO), the Organization’s permanent secretariat, was established in  London  and moved to  Geneva  on 19 July 1920. It set up shop in the building that is today the headquarters of the International Committee of the Red Cross (ICRC), across from the Pregny entrance to the Palais des Nations. ILO soon realized that the building was ill suited to its activities and so decided not to buy it. The decision to build new premises was taken at the 2nd Assembly of the  League of Nations . The foundation stone of the new building was laid at a ceremony at Sécheron, on the shores of  Lake Geneva , on 21 October 1923. The building, which was constructed by Swiss architect Georges Epitaux (1873-1957), was inaugurated less than three years later, on 6 June 1926. ILO’s current premises, on the route des Morillons, were inaugurated on 12 November 1974.

(Photo: ILO's first premises (1920-1926), today the headquarters of the International Committee of the Red Cross (ICRC).) 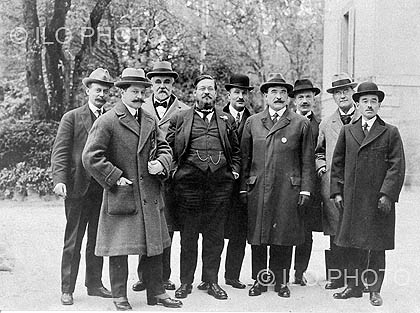 Establishment of the Section of Co-operation (1920)

The ILO remains the only specialized agency of the United Nations with an explicit mandate on cooperatives.

During the first years of ILO’s existence, international labour standards were adopted and regular supervisory activities carried out each year during the plenary meetings of the International Labour Conference (ILC). The rapidly growing number of ratifications soon led, however, to a concomitant rise in the number of annual reports submitted. It became clear before long that the Conference plenary would no longer be able to examine all the reports, adopt new standards and deliberate other key matters. In 1926, the 8th Session of the ILC therefore adopted a resolution establishing an annual Conference committee (subsequently called the  Conference Committee on the Application of Standards) and asked the Governing Body to appoint a technical committee (subsequently called the Committee of Experts on the Application of Conventions and Recommendations).

The two committees would become the pillars of ILO’s supervisory system.

The Committee of Experts is an independent body made up of jurists appointed by ILO’s Governing Body. Its mission is to examine the application of ILO conventions and recommendations by the Member States. The experts come from different geographical regions, legal systems and cultures. The Committee meets each year in November and December. Its task is to indicate to what extent the legislation and practice of each Member State conform to the conventions it has ratified and to what degree the Member State discharges the obligations incumbent on it by virtue of the ILO Constitution. In accomplishing that task, the Committee adheres to the principles of independence, objectivity and impartiality.

The Conference Committee on the Application of Standards is one of the ILC’s standing committees. It is tripartite and as such comprises government, employer and worker representatives. At each session, the Committee elects a bureau made up of a chairperson (a government member), two vice-chairpersons (employer member and worker member) and a rapporteur (government member). The Committee meets ever year during the June session of the ILC. Its deliberations focus on:

The Committee of Experts and the Conference Committee examine the annual reports of the Member States on the measures taken to give effect to the provisions of the conventions to which they have acceded. This is the regular supervisory mechanism for the obligations arising from conventions and recommendations (articles 19 and 22 of the ILO Constitution).
The double-discussion system comprises the mechanisms used to adopt international labour standards. In 1924, a so-called “double-reading” system was introduced on a trial basis. It consisted in submitting draft conventions to a vote at two successive sessions of the International Labour Conference (ILC) and worked on the following principle: the vote cast at the first of the two sessions was considered as provisional only, so as to give the delegates and governments time to consider the provisions adopted at their leisure. Each government had the right to propose amendments before the final vote, one year later at the following ILC session. In practical terms, the double-reading system left much to be desired. It was abandoned and replaced in 1926 by a new procedure known as “double discussion”. Every question continued to be deliberated over two years, but each round of deliberations was distinct in nature. The first session of the ILC considered the question in general; the second worked on the actual texts, in some cases adopting a convention or a recommendation. This system was applied for the first time in 1927 and 1928. It has been maintained ever since with only a few changes. 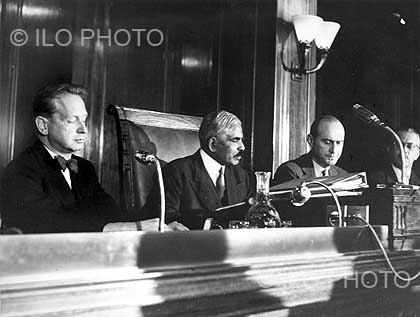 “This fundamental convention prohibits all forms of forced or compulsory labour […] Exceptions are provided for work required by compulsory military service, normal civic obligations, as a consequence of a conviction in a court of law […], in cases of emergency, and for minor communal services performed by the members of a community in the direct interest of the community. The convention also requires that the illegal extraction of forced or compulsory labour be punishable as a penal offence, and that ratifying states ensure that the relevant penalties imposed by law are adequate and strictly enforced.” (See Rules of the game: a brief introduction to international labour standards, p. 40)

Between 1922 and 1932, the Permanent Court of International Justice (PCIJ) today the International Court of Justice, delivered four advisory opinions pertaining to ILO’s competence:
According to C. Wilfred Jenks (see Key documents), ILO’s work could have been limited or even compromised had the PCIJ placed a narrow construction on its functions. The Court, by recognizing that Section 1 of the Constitution (called the Preamble as of 1946) was a reference text that defined the competence of ILO, thus took a decision of paramount importance. By defining ILO’s competences broadly, the PCIJ truly enabled the Organization fully to develop its activities internationally.

In addition to discharging its missions relating to international labour law and documentation, ILO developed concrete activities in the member countries. Indeed, the problem of adapting the international labour conventions to local and regional conditions arose as early as 1919. This development, which was defined by the term “regionalization”, saw the gradual establishment of regional conferences and of a network of branch offices and national correspondents.  The first regional conference of Member States was organized in 1936, the aim being to examine problems of particular interest in a given region. The Santiago Conference adopted 26 resolutions relating to social security and working conditions in countries in the Americas. Numerous points were discussed, including: 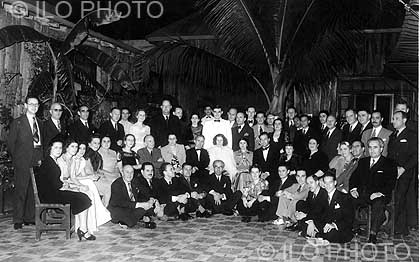 (Photo: ILO staff at the opening session of the First Labour Conference of American States, 1936.)